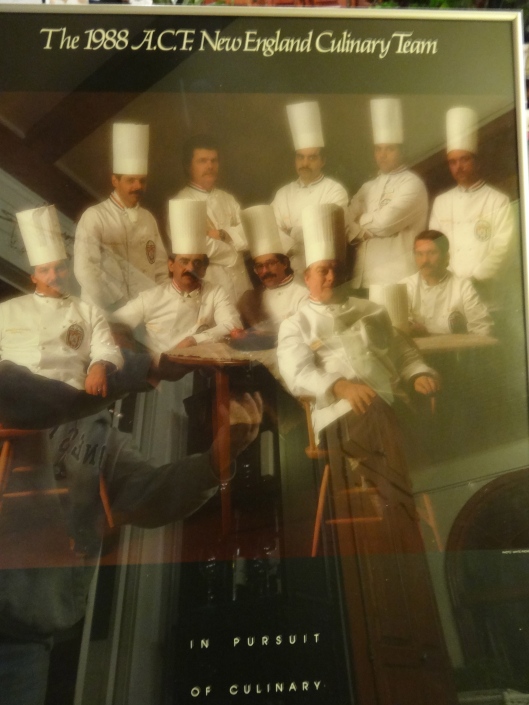 It was October 1988 at Logan International Airport when we were waiting to board a Lufthansa airplane to Frankfurt, Germany. As we (10 team members, spouses, apprentices, manager and coaches) lined up with our tickets I started to reflect on the last 18 months of preparation for this moment. We had gone through a great deal together: learning each other’s strengths and weaknesses, losing one team member due to his work requirements but gaining an excellent replacement; Charles Carroll (the youngest member of the team at 23) struggles to raise the money to support our efforts, nearly disbanding after a dismal performance at a Boston Show, re-energizing after a training session in the Adirondack’s, coming together as a true team and now waiting to show the world what we could do. I put nearly 20,000 miles on my car going to practices over the past year and a half, and was ready to see if it would pay off.

Arriving in Germany, along with hundreds of cooks from around the world was energizing. We passed quickly through customs (only to return in another day) as the German security guards seemed very anxious to host this onslaught of chefs. Arriving at our kitchen (home for the next 7 days) we were met by the chef who welcomed us and turned over the keys. We could have the kitchen every day from 2 in the afternoon until 6 the following morning for the next 7 days, but had to share the space with the Austrian National Team. In total, there would be 15 chefs, 4 apprentices, 2 team managers and various advisor/coaches occupying the space. It would get very crowded, very quickly.

What we had learned over the past 18 months was that at this point we could only execute what we knew, we had practiced our food programs many times so we knew what to do, let’s just do our jobs and try to have fun. Easy said when we were fully aware that a panel of chef judges would scrutinize our work over the 5 days of competition, many sponsors had gone out of their way to raise the funds to support us, and we were representing the New England States and the U.S. as well.

Since this would be our only day without kitchen time, we traveled to the convention center to see our display space (paid for by Michael Minor and Minor Foods) and would sit down to a traditional game dinner as a team with our spouses and supporters. It felt right, but we were all nervous and ready to unpack and start cooking.

The team stayed at Bed and Breakfast and had the entire building to ourselves. Nice accommodations, but the owner had a tough time understanding our schedule (we would be working from 1 in the afternoon until 7 a.m. each day, needed to sleep for a few hours and wanted breakfast at 12 noon each day). It took her some time, but eventually accepted our strange hours of operation.

In the kitchen we were like a machine. Each day two chefs of the ten member team were showing in the competition. The two who were on the schedule for the next day were assigned to work on their own programs while the remaining six were assigned to help the show chefs for that day. Everyone had their assignments, we had drilled through them many times over the past 18 months, and we started to unpack, set-up our mise en place and rock the food. At 4 a.m. each day, the van was packed with the show chefs program and off they went with the advisors and our team manager. Everyone else stayed behind to clean and organize for the next day. We only had a mile or two to drive, but at 20 miles an hour (didn’t want to upset the food platters on board) it was a long ride. We entered the convention center each day and proceeded to our show table. The chefs displaying that day would supervise the final placement of platters and plates, touch things up, and direct the advisors on making sure the whole table was pristine. Judging began at 7 each day and show chefs and the manager would stay until the judges had been through our table. We would not know the results until later in the afternoon.

Off for 2-3 hours of sleep, a shower and some breakfast – we were back in the kitchen to start on day two preparations. The show chefs from day one along with the team manager would return to the convention center to get the results. We had just sat down to a family meal prepared by our advisors when the call came in. The team captain took the call and returned to the table. We waited for his news. He raised his glass and said: “can you think of anything at this point better than a gold medal?” We waited for a few seconds while he took a drink. “How about two perfect scores”! The room erupted! If we were energized before, the energy level just increased ten fold. Now the message was clear, we all had gold in sight.

Michael (Mickey) Beriau and Danny Varano had set the bar very high. It was everyone’s job to keep that momentum going.

On Wednesday and Thursday I will post the completion of this story. Stay tuned for the balance of “My Octoberfest”.

Posted by culinarycuesblog | Filed under Uncategorized