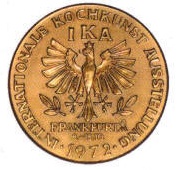 The Culinary Olympics were over. Our team was exhausted, yet numb from exceeding our own expectations. It certainly felt good to walk away victorious, but what would take some time to sink in was that we were successful because we came together as a team. It had much less to do with individual talent, it was all about a group of chefs with a common purpose. A team of people who understood and supported each other. We had become the “cinderella” team to many back home and a model for each of us and others who worked with us for the years to come.

After the final award ceremony we headed down to the Saxon House district of Frankfurt (one of the only historic sections of town that survived the bombings of WWII) to a Brathouse that had been rented by Michael Minor for the various teams that represented the United States. A restaurant full of chefs eating German sausages, Sauerkraut, Pigs knuckles and toasting with tankards of German beer. It was incredible and such a wonderful release. Thank you Michael!

After our first decent nights sleep we boarded a bus for Austria. We were to be the guests of the Austrian Team that shared the kitchen with us in Frankfurt. Driving at night on the autobahn hid the wonderful scenery that we would encounter the next day. We checked into a pension later that evening and awoke to the most spectacular view of the Alps surrounding us. That day we were given the key to the city of Innsbruck by their mayor and toured this Winter Olympic community. In the evening we traversed through the woods to a Hanzel and Gretel style restaurant owned by one of the Austrian Team Chefs. We enjoyed tremendous ethnic food and were honored to be the first Americans to ever set foot in the chef’s private wine cellar. We toasted with schnapps, drank more wine and claimed our friendship for life.

It has been twenty-five years since that date in October 1988. Our team members have gone on to pursue their individual goals. We will always share in that experience that changed our lives. Charles Carroll (the youngest member of our team) has gone on to receive international recognition as one of the most accomplished chefs from the U.S. He served on subsequent ACF Regional and National Culinary teams, left the Balsams, his employer in 1988 to now serve as Executive Chef at River Oaks Country Club in Houston. He is the author of two books, frequently serves as an inspirational speaker at conferences, conventions and graduations and most recently has taken on the role of facilitator for culinary and entertainment events for our troops in Afghanistan. Michael Beriau moved on to become the Executive Chef for Dole and Bailey out of Boston and now serves as the Executive Chef for White Cliffs Country Club on the Cape. He returned to competition to serve as a team advisor for the U.S. Culinary Team in recent years. George Higgins is now one of the most revered pastry instructors at the Culinary Institute of America and turned out to be quite an accomplished drummer with a band comprised of other chefs from the CIA. Walter Zuromski founded Chef Services Group, a firm that works with foodservice companies to develop gold standard product formulations. Danny Varano continued teaching in the Connecticut School system and recently retired. Varano was inducted into the Order of the Golden Toques for his accomplishments as a chef. Lars Johannson eventually retired from Johnson and Wales as the director of the pastry school. The college named their retail bakery after this incredible pastry chef. Joe Faria left the Ritz Carlton in Boston shortly after the team returned. He is now Executive Chef at Quail Valley Golf Club in Vero Beach, Florida. I stayed at Paul Smith’s College as Dean until 2005 when I returned to industry as Executive Chef of the Four-Diamond Mirror Lake Inn. In 2008 I returned to education as Vice President for New England Culinary Institute and in 2012 formed Harvest America Ventures, a consulting company for restaurants and culinary schools.

We lost three of our team members and a dear friend supporter over the past few years: Anton Flory, our team manager and certified master chef; Roland Czekelius our team captain; and Neil Connolly a pastry chef member of our team. Bud Matheson was the owner/operator of Dole and Bailey. Without Dole and Bailey’s help, our team would have never raised the funds to support our efforts. Bud accompanied the team to Germany and Austria. What we did not know at the time was that on the way to Austria the team was out of money. Bud pulled out his checkbook and donated additional funds for the team so that we could enjoy our accomplishments in Innsbruck. A great man.

In the years that followed, I worked with many students and tried to relay the joys of teamwork and the challenges of competition. I am always proud to note that two of my former students represented the United States on teams over that period of time. Jamie Keating as a member of the U.S. Regional and subsequently a member of the U.S. National Team and David Russ (one of my first students) who represented the U.S. as a member of numerous Army teams competing in the Culinary Olympics.

That call from Anton Flory in 1986 changed my professional life. If it were not for that moment, I would not have had the opportunities that I have thoroughly enjoyed over the past 25 years. I am sure that each team member feels the same way about their opportunities.

Twenty-five years later I tip my toque to Anton Flory, Roland Czekelius, Neil Connolly, Bud Matheson and all the suriving team members and advisors for a life-changing opportunity. Happy Octoberfest!

In January of 2014, the remaining team members will gather at Joe Faria’s shop in Vero Beach to share stories, and cook for charity.

1 thought on “MY OCTOBERFEST – MEDALS BEFORE BEER”