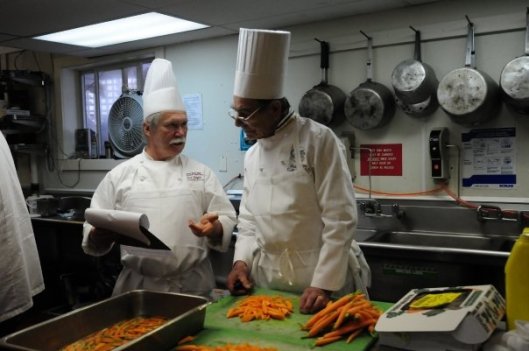 Certainly one of the hot topics throughout the past election cycle and moving forward is the immigration policies and shortcomings of the United States. There is a political bent and there is reality. You can choose the side that you want to lean towards, but I can only think in terms of what I have experienced over a career in food. Obviously, the country needs laws and must enforce a strict and thorough process for allowing persons from foreign countries and providing them with the opportunity to work. This being said, the demonizing that has been taking place as we wrestle with finding a fair, equitable, and workable solution troubles me. There is a softer, yet important factor that many in the restaurant industry hold as essential. Diversity in restaurants allows this industry to serve the public, grow, and exude a service and work ethic that is essential to success.

I support, as do likely most Americans, a policy that appropriately screens and requires that those who enter our borders and stay the course to become members of our communities, demonstrate respect for our country, and desire to be law-abiding members of those communities. At the same time, I relish that America has always been (by design) a country that welcomes others and provides them with some level of taste for the American dream. To waiver from this founding ideal is to change the nature of the greatest country on the face of the earth. I can only speak to those individuals with whom I have worked with and called my friends over four generations in the restaurant business. So, here are my observations and experiences:

The first chef that I worked for was classically trained in France, worked for the Hilton chain as Executive Chef for Montreal’s Queen Elizabeth Hotel and was transferred to the Buffalo Statler Hilton Hotel. The company helped to obtain his green card, but knew that as is the case with many chains, he would likely only be at this post for a few years before moving on. He was extremely professional, spoke perfect English and French, demonstrated to me how the classic kitchen brigade worked and made me aspire to stay in the kitchen for the rest of my career.

[]         THE CLASSIC BRIGADE WAS A PRIME EXAMPLE OF RESTAURANT DIVERSITY

This 1,200-room hotel was busy with multiple restaurants and 18 banquet rooms that were often full with events taking place simultaneously. The chef needed seasoned veterans to fill key roles in his brigade. Here are just a few examples:

At a transition point in my career I left a management job to return to the kitchen. I worked with a Greek immigrant restaurateur who had a quality fine-dining operation and lived on the second floor of the facility. He was everything that you hear of the stereotypical Greek restaurant owner. He counted every orange and potato that came off a vendors truck, watched the use of leftovers like a hawk, went ballistic over unnecessary waste, and taught me that this is a business of pennies and the job of an owner or chef is to ensure that every employee knows this and works together to help the restaurant remain profitable.

Having already stated the importance of the dishwasher, I could not write this article without pointing to one operation that played a role in my career. Finding solid dishwashers is always a challenge, yet in this restaurant we had a solution. The owner hired a family of Mexican workers (4 family members) and he allowed them to make their own schedule. The guarantee was that, no mater what, there would always be someone there when needed. If the dish area was slammed – a call went out and additional family members would miraculously show up to help him through the crunch.

By far, the most talented garde manger that I ever worked with was from Portugal. He commanded the garde manger kitchen at the Ritz in Boston – the same Ritz that Escoffier helped to open generations before. In his early 20’s, his skills, maturity, passion, and work ethic were unparalleled. Later I would share a spot on an Olympic Culinary Team with him and learn valuable techniques that were applied throughout my career.

My mentors and the driving force that moved me from a satisfied chef and educator to an obsessive proponent for giving more than you get and the pursuit of perfection in everything that I do. They learned their trade in Austria and brought those skills to seek opportunities in America. They were gentlemen, chefs of renown (one was one of the first five certified master chefs in the U.S.), honest, driven, calm, but firm, and great teachers. I do my best to emulate their characteristics.

A large presence, a highly respected pastry chef (one of America’s best), the finesse of a Swiss watch maker, an honest critique of others, and a warm father figure, thoughts of this chef and his work still bring a smile to my face. He became my Yoda.

I worked with line cooks of Polish origin while in Buffalo restaurants. What they brought to the table was a family history around food appreciation. They could cook; they had excellent palates, and passed on the importance of traditions in cooking.

Proper, dignified, professional, classic in approach, rarely flustered, able to stay away from the fray- whenever I had an opportunity to work with a Brit, and there have been many- I always did. They bring a sense of “how things should be done” to the workforce. There are, of course, those exceptions to the rule – the tyrants and better than everyone else individual, but from my experience, they are rare.

Hands down – the best workers in a kitchen. They are organized, confident, seasoned, knowledgeable, and able to solve problems, and fast as hell. It must be something genetic.

Same as Ecuadorians – Chinese cooks and chefs are extraordinary. I have even worked with Chinese chefs who were the entire kitchen staff in an “authentic” Mexican restaurant. They know how to cook and are adaptable.

Since my heritage is Norwegian, I have a soft spot in my heart for those from the land of the Fjords. This particular chef was sous chef to her husband at a busy American Plan hotel. Her focus was on garde manger and the daily luncheon buffet, but in that role her food and presentations were always spot on. She demonstrated strong, but calm leadership and inspired those who worked with and for her to always improve.

Seasonal J-1 visa employees from Europe and South America are the saving grace for operations with business fluctuations throughout the year. The Croatian dishwashers, in particular were exceptional. Hard working, always available, never complaining, and in most cases – they worked a second job at another restaurant. I would hire them any day.

The front of the house, unfortunately, to many American’s is a transition job. There are few who would state that their career goal was to wait tables. Those from European, South American, and some Asian countries are different. I have found them to be pleasant to guests, anxious to do the job well, thrilled to have an opportunity to improve their language skills, and proud to serve.

I have worked with many artisans, but none as unique as those who have made craft breads their life. No one has the connection to the product in the same manner as a bread baker, and few do it better than those who come from countries were “GREAT” bread is revered. There was a time when one could say that it was nearly impossible to find good bread in America – that has been changing thanks to the influence of these immigrant bakers. Praise the bread baker!

The point all of this is simple – when people seek to create silos based on origin, religion, preference, color, age, etc., we lose so much. I feel very privileged to have worked with individuals of diverse background, to share stories, to learn about their culture, to assimilate some of the incredible skills that they possess, and to eventually call them friends. This is when all of those silos fall down and we get a chance to appreciate each other.

It is estimated that at least 20% of those who work in restaurants in the U.S. are from another country. Some are here legally and some illegally. Most restaurants will verify citizenship or green cards before hiring, while others will skirt the process and simply accept their word and a presented social security card (which might be fake). In any case, I am personally not familiar with any immigrant restaurant worker who has taken the job of a willing American worker, nor do I know of any restaurant that hires immigrant workers for the sole reason of paying them less than they would an American. I am sure that this takes place, but this has never been my experience. We are an industry that relies on, and relishes the opportunity to work with people with all kinds of different backgrounds and preferences. This is what makes the restaurant business, in my opinion, so fantastic.

Black, yellow, white, Jewish, Catholic, Hindu, Muslim, atheist, straight, gay, republican, democrat, independent, tall, small, thin, heavy, easy going, hard as steel, happy, angry, ex-prisoners, alcoholics and recovering alcoholics, deaf workers and those who were legally blind, enthusiastic cooks and servers and those who were just collecting a paycheck, citizens, green card holders, illegal immigrants, and anything and everything in-between – you are all part of the industry that I still hold as important and rewarding.

When you think of the immigration issue, think of the make-up of this country. Encourage your representatives to push for fair and compassionate immigration laws. Create a system that encourages entrance, but requires, in a fair and appropriate way, that those who do come do so with the intent of making this country their legal residence. Everyone should help in the process: government, businesses, communities, and neighbors. This is what makes America great.

With silent lips. “Give me your tired, your poor,
Your huddled masses yearning to breathe free,
The wretched refuse of your teeming shore.
Send these, the homeless, tempest-tost to me,
I lift my lamp beside the golden door!”