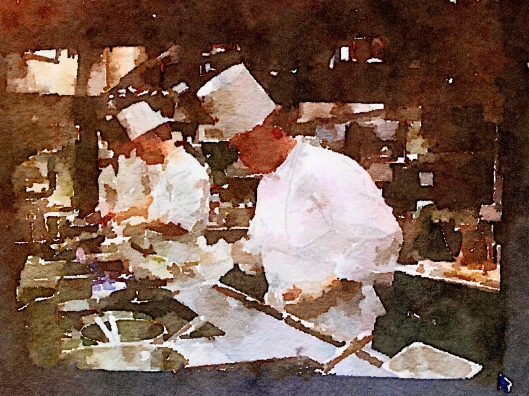 From that first job as a dishwasher in 1966 when I was 16 years old – I knew I was part of something interesting. Who knows what struck a chord – it might have been the pace, the banter between employees, the time spent helping out the breakfast cook during a rush, or even the young college girls who worked as servers – but there was something that made me think that this was work that I was going to enjoy. Working in restaurants remained a part of my life for the next fifty years, but initially it never occurred to me that the job, as enjoyable as it was, was part of anything larger than my interaction with the people where I happened to tie on an apron.

Somewhere along the way this changed. There must have been a moment when I realized that I was a part of the population who knew the positive and negative aspects of kitchen work and who felt compelled to stand tall and proclaim their connection to all whom would listen. The job became a career, and with that career came a connection to a somewhat underground population of folks who worked through the heat, the burns, the cuts, the heavy knees and swollen feet, the abusive nature of some egotistical chefs and owners, people who felt the stress associated with the unpredictable onslaught of orders every day, and that feeling of winning and losing that accompanied a typical week behind the range. I never stopped to think about it, but I had joined a special club – maybe more than a club – this was as significant as ethnicity – a family that went beyond the place where I worked – it extended to anyone and everyone who worked in nearly any type of restaurant. We were one.

I’m not sure exactly when it went to the next level – maybe it was Anthony Bourdain with his tell-all book: “Kitchen Confidential”, or maybe that was just the most vivid example. At some point working in a kitchen was an application to a counter-culture, not too dissimilar to that counter-culture of people in the 1960’s who separated themselves from the norm, felt compelled to express themselves in dramatic ways, and who knew they were part of something bigger than one – they were a movement.

Cooks and other restaurant employees are different. They look, act, feel, and talk differently than many other groups in society, and they are proud of it. They are unified in their difference, they tend to look at the unrealistic demands on their time, the physical nature of the work, and the strain on emotions as martyrdom – something that they hold as a badge of courage even though they might complain about how it impacts their lives.

Here are some aspects of this counterculture that cooks now own, relish, and love to hate all at the same time:

There are many ways that line cooks tend to express themselves today. Some are subtle while others are straightforward. It is hard to find a cook today without multiple tattoos. These are, from my experience, forms of self-expression and in most cases the choice of tattoo tells a story about the cook. It might be detailed ink depicting knives and other tools of the trade, specific ingredients, depictions of demon dreams, or not so subtle logos of brands. In all cases, it seems like the tattoo is part of the modern kitchen culture. Aside from the physical appointments – each line cook worth a grain of salt is expressive on the plate or in the pan. Sometimes it is a signature marking on a steak, the way that their station is set, the motions of a pan in sauté mode, or how a plate is assembled – each cook thrives on finding a way to make their personal statement.

Most line cooks and chefs identify with the title almost as much as to their own name. I haven’t physically worked in a kitchen since 2012, yet most people I know (even some of my family members) call me “chef”; for some reason I haven’t tried to convince people otherwise. The same is true with all who take their role in the kitchen seriously – we all like the brand – it has meaning, it exudes pride, and helps to explain some of our quirky actions and habits.

There is a real connection between all cooks, a connection that extends to anyone, anywhere who shares the battle scars and stories of fire, sweat, and nights when demand exceeded capacity.

I have mentioned this before and still I find it hard to explain, but those cuts, burns, swollen feet, and beginning stages of carpel tunnel syndrome are looked upon as a right of passage, battle scars that come with a story, things that are almost bragged about. We all have them, we all talk about them, and most of us tend to exaggerate the stories behind them. Many cooks, like me, had a special relationship with doctors and nurses in the local emergency room.

After years of working 60 or more hours per week, going sometimes weeks on end without a full day off, watching schedules change multiple times in a week, and missing out on those family holidays and special events – cooks tend to scratch their heads when trying to relate to people with “normal” jobs. The thought of working 40-hour weeks with two days off is often referred to by cooks as a part-time job.

It’s all about the rush. As hard as it is to work in a busy restaurant, as nervous as every cook tends to get just before the floodgate of orders start ticking off the POS printer, and as much as self-doubt creeps into their lives with a disappointed look from the chef – when the machine starts to flip into full-gear, and that adrenaline kicks in, every cook stands tall, clicks his or her tongs, wipes his or her brow, chugs another espresso and proclaims: “bring it on”. This is what we wait for – that adrenaline rush of excitement and call to arms.

Maybe more than anything else – cooks live in a world that is separate from most others outside of kitchen work. They sleep later (unless a breakfast cook), and then crawl out of bed for a waiting cup or two of coffee, shower and bound off to work. They typically work 10-12 hours a day, more often than not – 6-days per week, and find that after that peak hour adrenaline rush and continued work until closing – there is never a desire to simply call it a night. A few hours of celebration after work with fellow cooks and servers brings them to their bed well past most reasonable persons threshold. After a late night with little sleep it’s time to start all over again. The life clock of a cook is socially isolating – thus they work and hang with the same people, the only ones that there is time to meet, and the only other people they understand.

Cooks learn early on that order (mise en place) is the most sacred of processes and must become the standard by which they approach everything in life. Without order there is chaos, and chaos is the ruin of any good cook. Just watch with fascination how a cook sets up his or her station – the preciseness, the symmetry, and the attention to detail.

Cooks may complain on occasion about the chef and his or her relentless level of expectation and sometimes unreasonable attacks on anything that doesn’t fit into the plan – but, they respect the chain of command, they respond with a resounding “yes chef”, and know that to entertain any other approach will lead to kitchen disasters.

All cooks are frustrated artists who are always seeking ways of expression and subtle moments of approval for their work. The plate is their canvas.

When set – the line cook is in character. He or she is ready to perform and in full control of their script. At the same time, just like actors in a play, those last few moments before the printer starts to tick off orders is filled with self-doubt, anxiousness, and near fear of what might lie ahead.

This is something that outsiders learn very quickly – a cook’s knives are the most sacred possession to them. They treat them with respect, care for them, keep them sharp and ready, gingerly place them in their roll bag, and always keep them close to their side. Anyone who makes even the slightest attempt to touch them without permission or use them inappropriately will witness the wrath of the cook.

Every cook has a crusty exterior persona. Sometimes they bark with contempt when someone messes with their system, and oftentimes he or she expresses himself or herself with colorful language in the process. Those who know these cooks usually realizes that this is a façade and underneath the cook is a warm, and oftentimes fragile being looking for approval and harder on themselves than any outsider might attempt to be.

This is who cooks are– unique persons who are members of the kitchen counterculture that only they can truly understand and appreciate.

“Our confused society badly needs a community of contrast, a counterculture of ordinary pilgrims who insist living a different way. Unlike popular culture, we will lavish attention on the least deserving in direct opposition to our celebrity culture’s emphasis on success, wealth, and beauty.”