It was 1959 when the late great Miles Davis released “Kind of Blue” one of the great jazz albums of all time. Over his creative career – many of the most accomplished musicians of a generation got their start or at least their inspiration from playing with or listening to Miles – he was, to many, a genius.

The greats and soon to be greats were attracted to Miles and built their careers around playing with this creative genius. Herbie Hancock, John McLaughlin, Ron Cater, Wayne Shorter, Chick Corea, and Joe Zawinul of Weather Report all had their start playing with Miles. Hundreds of others including Carlos Santana, Prince, John Legend, John Mayer, and Jimi Hendrix reflected on how Miles Davis influenced their own creativity and style. He was their Yoda.

“I’m always thinking about creating. My future starts when I wake up every morning…every day I find something to do with my life.”

Miles was fully engaged with his body, mind and soul and as a result – his music was an extension of the person that he was. The very best cooks are Miles Davis protégés, even if they are unfamiliar with his music. It is the creative energy of body, mind and soul that is at the center of great cooking whether you are a line cook, prep cook, or chef.

Our industry has it’s own Miles Davis Pied Pipers: Thomas Keller, Alice Waters, Joel Robuchon, Alain Ducasse, Daniel Boulud, David Chang, Grant Achatz, Dominique Crenn, Stephanie Izard, and hundreds of other talented chefs are driven individuals who attract others – drawing energy from their body, mind and soul. Serious cooks are in constant search of, and in real need of that something that separates cooks from great cooks. Nobody knows what that something is until they become part of it.

“Anybody can play. The note is only 20 percent. The attitude of the musicians who plays it is 80 percent.”

To paraphrase Davis: “Anybody can cook. The recipe is only 20 percent. The attitude of the person who cooks is 80 percent.”

Miles would have understood and appreciated the regimented exactness of Thomas Keller and Daniel Boulud because even with his improvisational style there was a foundation of discipline. He might not have understood the free form nature of Grant Achatz and Dominique Crenn, but their beautiful creative thought would have inspired him. He would have responded with enthusiasm to the seemingly loose style of David Chang because it is cooking that comes from the soul. Miles was the perfect example of ambassador for body, mind and soul.

Serious cooks are truly connected with their craft, the tools that allow their application, and the food that they have an opportunity to interpret. Like Miles, they thrive on the creative connection to body, mind and soul that cooking provides. They have little patience with those who fail to see how important their work is and with those who simply view the job of cook as a process and a means to an end resulting in a paycheck for hours worked. They don’t understand and certainly don’t appreciate those who demean the profession and the privilege of being a cook just as I am sure Miles Davis would have little patience for those who simply read the notes on a page and play without a connection to body, mind, and soul.

So, here is a primer on being a chef with that connection to body, mind and soul:

Cooking is such a physical endeavor. There certainly are many other physical careers, but few that use the body in such an all-inclusive manner. The cook who is in tune – is in tune with every ounce of physical interaction in the kitchen environment and with the food and he or she touches. The finger tips can distinguish rare from medium, the hands control the flip of vegetables in a pan; the legs, feet and back are in constant motion as a cook bends, turns and lifts throughout a 10-12 hour shift; and the tinge of heat on the brow, arms and face is intense and ever-present. A cook is “all in” physically and as such – totally in touch with his or her environment.

The nerve ends in a cook’s brain are firing in rapid succession. The charged directives from the expeditor: “ordering…fire…pick-up…in the pass…” represent a cadence, a beat – similar to the pace orchestrated by Miles Davis as he led his musicians through a difficult arrangement. The cook’s brain is busy categorizing orders and their timing, referencing the sub-conscious database of cooking steps, and activating his or her flavor memory through the process of taste, season, taste. The eyes are ever focused on scanning the signs of cooking (caramelization, reduction, grill marks), the status of fellow line cooks, the details of an order, and the condition of station mise en place. All of these images are sent to the brain for analysis and action every nano-second. When the mind is alert and fully engaged then the magic of a functional kitchen appears to be beautiful and as smooth as a piece of improvisational music – organization out of impending chaos. 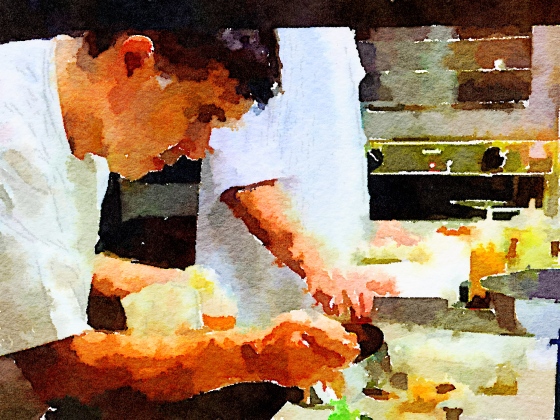 Miles felt his music – he felt it deeply – much deeper that physically and mentally – he felt it in his soul, his essence, his reason for being.

“Music is an essential part of human existence. Listening to music leaves a major impact on each one of us. It can boost your mood, reduce stress and improve your health and overall wellbeing.”

The same can be said of passionately prepared food. “Food is an essential part of human existence. Enjoying food leaves a major impact on each of us. It can boost your mood, reduce stress and improve your health and wellbeing.”

Miles music was a reflection of who he was, what he was feeling, and how he was connecting with people and the environment around him. Whether it was his instrument, the superbly talented musicians who surrounded him, or the audience mesmerized by his creativity – what occurred was a soul connection. In a kitchen filled with talented cooks who feel the power of what they do, have the skills that define great cooking, and are connected with fellow cooks, and the charged environment of the kitchen – the result will always be soulful food. Thomas Keller’s perfectly executed French cuisine is soulful, Dominque Crenn’s uniquely creative interpretations and controlled improvisations are soulful, and David Chang’s representation of culturally influenced flavors is deeply soulful.

When cooks prepare food with soul it is because they understand the ingredients, they are in tune with the history of the culture behind a dish, they appreciate the farmer, the fisherman, and the rancher who brought the ingredients to his back door, and they respect the process of cooking – moving those special ingredients from their natural state to a plate in the pass. Soulful food is not a given – it comes from dedication and passionate connections.

“I believe, from reading biographies, that the great musicians have also been great cooks: Miles Davis, Dizzy Gillespie, Thelonious Monk, Max Roach. I think I’ve worked out why this is – unsociable hours, plus general creativity.”

Be a Cook Connected with Body, Mind and Soul