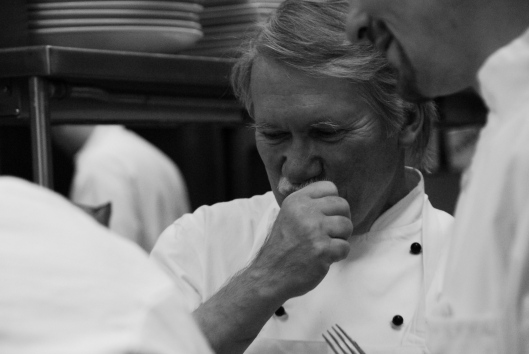 After watching the Grammy Awards last night I was impressed with something that many might not have seen through all of the glitz and glamour of an entertainment spectacle. What impressed me the most was the “advantage of age” and the realization that many artists from my era are still relevant in people’s minds and continue to have an impact on a new generation of musicians and performers. Now, I may not appreciate or even “get” some of today’s musical mediums but that doesn’t mean that I fail to respect the artistic process. I do “get” how things evolve, yet how much the certain wisdom of elders permeates even the youngest and most “unique” artist of today.

I believe that this same observation can be made when it comes to restaurants, kitchen operation, cooking, and service. There was an article and YouTube piece floating around this week about a 14 year old “chef” and his ability to plate up multiple course meals with the finesse of a Thomas Keller. I found it interesting, no I guess more appropriately “amusing” calling Justin Bieber a monumental artist. There is no question that both individuals are gifted and have enormous potential to make a difference in their respective fields, however what they have in natural talent pales in comparison to what they lack in terms of experience, the ability to reason, problem solving, successes and failures, and most importantly, their ability to coach and lead others. These attributes can only come from time in the saddle. There is no substitute for experience, period. Some may have an innate ability that can speed up the learning curve, but without facing challenges, making attempts at resolution, failing often and finding the right formula for recovery – even the most talented cook, musician, painter, carpenter, or designer will struggle and crash.

If you are now a chef or restaurateur I know that you can appreciate these statements. I do not have all of the answers but am confident that given an opportunity to step back from a situation in the kitchen I can pull up some previous experience that will help me to make a decision (hopefully the right one). This cannot be taught in a classroom, read in a book, or be something that people are genetically in tune with, it is a result of being there and doing it more than once.

Eric Clapton was a wild and crazy, gifted guitar player when he was with John Mayall and the Yardbirds and later with the group Cream. His chops on the guitar allow people to refer to him as a guitar god, but it wasn’t until he had endured heart break, the personal drain of an abusive lifestyle and grown in years that his licks became a craft and subsequently legendary. Does he play with the same intensity as when he was experimenting in his twenties – no, but listening today to the maturity of his playing and the warmth and pain in his voice it would be hard to deny that Clapton will be a benchmark and a source of inspiration long after he is gone.

Excuse my obsession with analogies, but I can see little difference between this example and the power of age associated with chefs and restaurant managers. I have stated numerous times how certain tasks within a kitchen are reserved for youth. When I spent four years beginning at 55 back in the kitchen as a chef and occasionally worked the line, I would often reflect on words from an old Little Feat song: “you know that you’re over the hill when your mind makes a promise that you body can’t fulfill.” As much as working the line was no longer something that was my cup of tea, the ability to put together a team, design menus to reflect the needs of different audiences, solve potentially disastrous situations when a function was about to go sideways was something that those agile young line cooks would have no clue how to approach.

To state that a young, gifted 14 year old could carry the title of “chef” was parallel to anyone inferring that the young, under twenty something Justin Bieber could be held in the same category as Eric Clapton or any other of the enormously talented and still relevant artists on the Grammy’s last night. Paul McCartney, Ringo Starr, Carole King, Chicago, Stevie Wonder, Metallica and Trombone Shorty may not have been backed with all of the fireworks and glitz of their contemporaries (although the show behind Metallica was pretty cool) it was apparent that these pioneers had the advantage of age that inspired those who were headliners with awards.

The next wave of stellar cooks and chefs who will change the face of dining in America should be admired for their gift, but it will be their experiences with life and the challenges that every day in the kitchen brings that will determine whether or not their impact will be felt past this season’s flavor of the month. We should never forget the foundations that have been built through the experiences of those who paid their dues through time behind the range, unforgiving guests, and restaurant experiences that nearly broke a team. We should never forget the importance of looking back before we look forward. In cooking, as in music, some things are the way they are because of trial and error and the consistent results that listeners or diners find satisfying and rewarding. In music it may be the tempo, the importance of harmony, the thrill of a well-conceived solo, or the message delivered through thought provoking lyrics. In the kitchen it is just as important to know how to extract complementary flavors from a dish or how to adjust a recipe based on the quality of raw materials that you receive. In restaurant management it is all about time and experience with people, your ability to listen, your sincere interest in their issues and what they have to offer and your ability to coach them and help them to become better every day. All of this comes from the advantage of age.

Sometimes we don’t know how much we don’t know until we face a situation without an answer. Say thanks to your chef or manager even though they may seem to be out of touch with your enthusiasm for changing things. Listen to them, learn from them and then go out and make your own mistakes. Your greatness in life will be a reflection on how much you hold this to heart and truly listen to the music that age can play.

PLAN BETTER -TRAIN HARDER (and Listen to Those Who Have “Been There, Done That”)