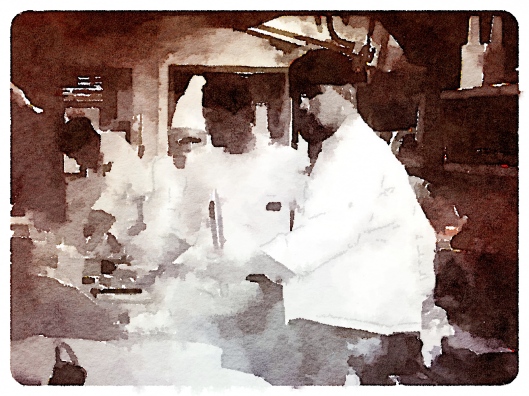 “Woke up, fell out of bed, dragged the comb across my head. Made my way downstairs and drank a cup and looking up I noticed I was late.” We all remember these lines from the Beatles storyline in: “A Day in the Life”. They are lines that most anyone can relate to for they represent the beginning of our time yesterday, today and tomorrow.

Each of us move in a different direction as our story unfolds, but one thing is clear: we may anticipate that the day will be predictable, yet in our hearts we know that this will likely not be the case. The day of a chef begins just as it does for everyone else – the major difference is the structure, demands and enormous number of unpredictable events that follow. So here is a chefs’: “Day in the Life”.

It is 5 a.m. when the alarm clock cuts through a restless nights sleep. Jake fights the initial urge to grab the clock and fling it against the bedroom wall, but he simply doesn’t have the energy after all. Last night’s service at the restaurant didn’t end until midnight and the standard couple drinks afterwards with his team ended at 1:30 when he finally touched down on his still unmade bed. As he recalled this sequence of events he realized that his clock was still screaming out as a reminder. He reached over and hit the 15-minute snooze button. The shower could wait a few more minutes.

Jake lay in bed with crusty eyes as he now waited for the 15-minute reminder to sound off. Finally, he gave up, shut off the alarm, stumbled to the kitchen and plugged a Peet’s Coffee pod into his Keurig.

Black coffee and 10 minutes of CNN later he was in the shower washing off the smell of fish, onions and garlic from the night before while clearing that crust from his eyes and cobwebs from his foggy brain. Jake had already begun to think through the day ahead that would begin a little after 7 a.m.

The chef’s major comfort at this point was that the phone had not rung yet. This meant that Lester and Marie had both made it in for the breakfast shift. Jake hated those rare days when he had to cover for an absent breakfast cook.

Jake tipped back another cup of coffee, popped 3 Ibuprofen, grabbed his iPhone and headed out the door. The chef’s apartment was only 15 blocks from the restaurant so he usually enjoyed walking (his only exercise) to clear his head and loosen his stiff muscles. At 6:55 he walked through the back receiving door and into the kitchen – his domain, a home away from home.

As usual his first task was to change into a crisp, clean chef’s jacket and apron, grab his clipboard and legal pad, another cup of coffee, look in the mirror (damn, he forgot to shave this morning) and touch base with his early team. The smell of bacon, onions and home fries filled the kitchen. This aroma never got old – it was the smell of a kitchen coming to life. Jake said good morning to Lester and Marie, grabbed a piece of bacon and started his morning walk through. Lester called out: “chef- do you want some breakfast?” “Sure” came Jake’s reply as Lester gently flipped two eggs over easy and set the plate with bacon, home fries, a grilled tomato and his signature fresh fruit garnish. Jake stopped for a cursory 10-minute breakfast at the end of the line, mopped up the egg yolk with a fresh biscuit from Marie’s bakeshop and quickly returned to the task at hand. “Thanks for breakfast” was always a comment from the chef that was well received by these two dependable cooks.

The chef pulled down the BEO (Banquet and Event Order) clipboards for the next few days to review production and any last minute orders that might need to be placed: Three coffee breaks with pastries today, a small luncheon for 12 in the boardroom, a picnic lunch in the courtyard for a business group of 35 and a wedding rehearsal dinner tonight for 25. A relatively light function day giving everyone plenty of time to concentrate on prep for a’ la carte this evening and maybe allow Jake a chance to catch up on some paperwork.

Jake moved on to his daily visual inventory of coolers and storerooms to ensure that product was properly rotated, labeled and dated and assess what shape standard prep was in. Prep cooks would be arriving at 8 and Jake wanted to have their day mapped out. They would need to prep both a chicken and veal stock, fabricate tenders and strip loins for the next two days, fillet 100 pounds of snapper scheduled to arrive from Florida this morning, peel asparagus, concasse tomatoes, cut pommes frites, wash all of the greens for garde manger, chop a case of parsley and the list went on and on. It would be a very busy day for his single prep cook and culinary school intern.

After making notes on production he reviewed orders scheduled to arrive and made a few notes regarding some last minute items that his vendors and local farmers would need to forage for him. His iPhone buzzed with a reminder about the Sales Office meeting scheduled for 9 a.m. This would still give him plenty of time to review with the prep staff and contact vendors on those last minute orders. Jake had a few minutes before the prep staff arrived so he pulled his knives from the office, removed that beautiful Sabatier 10 inch French knife from it’s holster and drew the blade down the surface of a wet stone to bring back the edge. He washed the knife (his pride and joy) and started cutting vegetables for a stock mirepoix. Carrots, onions and celery were easy prey for this razor sharp blade as Jake flew through the cutting process in a few minutes. The veal bones were already in the oven and he pulled them out, placed them in a stockpot and used the pans and drippings to caramelize the mirepoix. He was just deglazing the vegetables with an inexpensive Cabernet when his two prep cooks walked in, ready to work. Jake left the remainder of the stock preparation in their hands and quickly reviewed their prep sheet for the day.

Jake had total trust in this small crew and was quite impressed with the intern that he brought on for the season. This was a young girl who was totally passionate about cooking, had great knife skills, understood process and always did things exactly as Jake had requested. He felt that she would go very far and had every intention of moving her to the line within the next few weeks.

Jake checked in with Marie about the pastries for the scheduled coffee breaks and made sure that Lester was set with breakfast and the details for the picnic lunch. The chef was now off to his Sales Office meeting (chef’s hate meetings because they have so many immediate tasks on their plate and meetings always seem to be an un-necessary distraction). The meeting focused on a review of current banquets and events and details about activities on the books for next week. Jake would need to plan a half-dozen different menus for parties coming up and, of course, the Sales Office needed them ASAP. Fifteen minutes into the meeting a call came into Jake from the kitchen; it was his young intern. “Sorry to bother you chef, but the seafood order just arrived and I think you need to come down and check it out”. Jake excused himself and returned to his kitchen, he knew that he was not going to be happy.

In the kitchen Jake found that his 100 pounds of Red Snapper had arrived from Florida, flown overnight. The fish had cloudy eyes and the gill sacks had been removed (a trick some vendors use to disguise the age of the fish). The fish was still OK by most standards, but not by Jake’s. The chef prided himself in always sourcing the best quality; freshest ingredients and he had no intention of ever shifting from that standard. Jake gritted his teeth wrestling with the desire to bang his fists on the table and release a tirade of expletives on the phone with his vendor, but he knew that this typical reaction was no longer acceptable in a politically correct world and his tone would set the mood in his kitchen. Instead he called the purveyor, lodged his complaint, said he would discard the fish and that his bill should be adjusted and that if he experienced this again he would stop buying from them and find another source. The Snapper would come off the menu for tonight and he would need to find a substitute.

{Follow part two of Jake the Chef – A Day in the Life, coming next week).