alcohol and chefs, chefs, cooks, drinking in the kitchen, restaurants 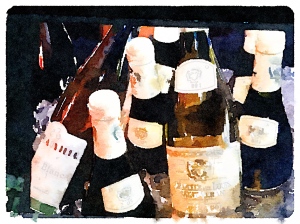 It is a story, too often in the making. A person, too young dies from self-abuse. It happens frequently in kitchens, the question is why? Now Don, the banquet chef at a hotel where I worked in the early 70’s, was not as young as some, but too young to die, catching everyone for some reason, by surprise.

Don was a real person, someone I worked with early in my career. He was unusual, but not so much by kitchen standards. We tend to attract a different type individual, sometimes introverted, sometimes not; sometimes self-confident, oftentimes not; sometimes full of creativity, sometimes lacking the desire to show what is there, underneath the crust and sandpaper personality. Don was unusual in different ways: he was a very large man (enjoyed eating) with ten kids at home. That’s right – 10! He managed to work, almost non-stop, sometimes arriving as early as 6 a.m. and in the kitchen until after 9 at night. If there was a banquet on the schedule, Don was there.

What Don lacked in finesse with food, he made up for in his ability to handle any number of guests or parties, without much fuss, ensure that hot food was hot and cold food cold, and consistently produce flavorful, attractive food. What was unusual about Don (aside from the 10 kids) was his ability to consume considerable amounts of alcohol without showing any signs of intoxication. In fact, Don drank constantly while at work (back in those days, the chef would turn a blind eye to this).

Don arrived at work, sometimes before most other employees, and always before the chef. He carried a paper grocery bag with him every day and would meander to the back of the kitchen where he had a personal locker. He would remove two 6-packs of beer and a quart of vodka and place them carefully in the locker. Don would move strategically to the pastry kitchen where he opened the liquor cabinet and lined up 4 shots of rum. After quickly tipping back the shots, a bit of color would finally come to Don’s face. Now he was ready for work.

Throughout the day Don would visit his locker making sure to polish off the beer and vodka before the end of his shift. If any of the cooks were using wine for finishing sauces, Don would make sure that he became part of the quality control tasting panel: one for the sauce, one for Don. He really didn’t care about the sauce.

This was Don’s routine. During the three years that I worked with him I never saw Don drunk. He looked a little rough in the morning, but with the addition of Mr. Budweiser and Kamchatka Vodka, he would gradually improve during the day.

One day when I arrived at work, the French butcher lifted his head from busting down a hindquarter of beef, looked at me, and simply said: “Big guy – dead.” He returned to his work.

There was no fanfare for Don, in fact I can’t even remember if anyone from the place he spent 70 plus hours a week at even attended his funeral. Now, maybe it was the 10 kids that did him in, but I feel pretty confident in saying it was more than likely his life of excessive consumption and lack of self-respect. Don drank and ate himself to death – plain and simple. Every so often I think of Don, regret not getting to know him better and find out why he lacked the desire to take better care of himself. I feel sorry for the 10 kids and his wife, who none of us ever knew, and the type of memories that his family must have of him. They probably never realized how good he was at his job, in spite of his drinking habit. More than likely, they never realized how many guests who passed through the hotel owed their great banquet dining experience to Don. All they likely knew was that he worked all of the time and when he came home, Don was, “three sheets to the wind.”

Let’s reflect back to that time in kitchen history for just a moment to paint a picture of Don’s world. Our kitchen was in the sub-basement of this hotel. Being a cook or a chef was not something that many people were tremendously proud of back then; if they had been proud then I doubt the hotel would have built a sub-basement just for us. There were, obviously, no windows, no natural light, no contact with people who didn’t wear cooks whites and hounds tooth pants. Don, like others who worked in the kitchen would come to work when it was dark and leave much later when it was dark again; never to see the light of day.

Cooks arrived through the back alleyway entrance, out of the public eye, passed by a security guard behind a heavy glass panel, punched in for the day, and 10-15 hours later left in the same fashion. Our friends, acquaintances and even those who fell into the category of enemies worked in that dungeon of a kitchen.

The kitchen was well equipped. 100-gallon stockpots lined the back wall, triple deck ovens on another, an island of 12 French top ranges, back to back, and steam heated food-warming units around the perimeter of the operation. There were plenty of worktables, walk-ins and reach-in coolers. The operation was designed for production and production is what Don and many other hotel lifers were about.

The chef’s office was off limits to anyone except the Chef and Sous Chef, but occasionally there was an opportunity for us, like in many other kitchens of the day, to rub elbows in the chef’s domain. Each day, those of us who worked on the line were given a beer ration. A six-pack or two in the reach-in was placed at our disposal to refresh us when the heat got to be too much. On Christmas Eve, New Year’s Eve, Fourth of July, or any other holiday that we had to work, the chef would invite the crew into his office for a drink or two, or three at the end of service. Alcohol was the reward for hard work.

The point being, the kitchen was, a few decades back, an environment that used alcohol as a tool for encouragement and reward. Those who already came to the field with low self-esteem and an even lower threshold for dependence, quickly found alcohol to be the solution to most problems.

Don might have passed away for other reasons, but I can’t help think that it was the environment of acceptance that set the stage.

So why am I writing about this? I don’t know of many restaurants anymore that issue beer rations or allow cooks to bring in their private bar every day, but the environment of acceptance still prevails. The intensity of working in kitchens and the build up of adrenaline that occurs every night before and during service almost demands the energy level continue long after the kitchen lights are turned off. Alcohol is the release of choice for many, and still the reward for performance even if not provided by the employer.

I thoroughly enjoy a glass or two of wine or a beer now and again; it has a place and is a natural complement to food and social events. The key is moderation and learning to be in control of the alcohol, not the opposite. There are far too many Don’s out there that are ticking time bombs. We need to recognize the signs in ourselves and in others and put on the brakes.

Don’t look back on your career and wonder how you might have made a difference with someone, but didn’t.

Rest in Peace Don. This was just one of those days that you were on my mind.

1 thought on “LIFE IN A BOTTLE – DON THE BANQUET CHEF”