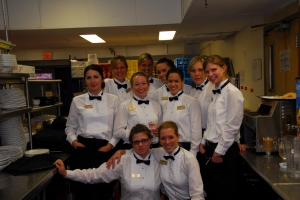 There are many examples of love/hate relationships or classic feuds that are difficult to rationalize: the Hatfield’s and the McCoy’s, Alexander Hamilton and Raymond Burr; Neil Young and Lynard Skynard, the Beatles and Yoko Ono, Democrats and Republicans, and, of course, Restaurant Servers and Cooks. What is the reason for these sometimes oil and vinegar relationships? Why did either side lose sight of the big picture? Are these feuds simply based on tradition or misunderstanding, not fact?

We have come to accept that Republicans and Democrats simply cannot get along or agree and Lynard Skynard and Neil Young intensely dislike each other as portrayed in song: “well, I hope Neil Young will remember a Southern Man don’t need him around, anyhow.” In actuality, Republicans and Democrats should be able to agree on what is right for our country and, oh by the way, Skynard’s lyrics were meant to support Neil Young’s charge against racist behavior. The point is, more often than not, feuds or traditional abrasive relationships are ill founded.

In the case of restaurant servers and cooks, consider these facts:

In all cases, it is important for everyone in a restaurant to understand that each job is uniquely challenging. Everyone works hard. In the end, front and back of the house share a common goal: customer satisfaction and restaurant financial success. To quote an old cliché: “walk a mile in my shoes..see what I see, hear what I hear, feel what I feel, THEN maybe you’ll understand why I do what I do..till then, don’t judge me.”

Servers and cooks are in it together. One cannot accomplish their goals without the other and as such, it is critical that they work well together. Here are a few points for both to keep in mind:

If we take a moment to understand each other, forgive those occasional mistakes, help to teach each other to improve, and throw out some words of support, we might just be able to get through service with a smile on our face.

1 thought on “ARE SERVERS AND COOKS LIKE OIL AND VINEGAR?”