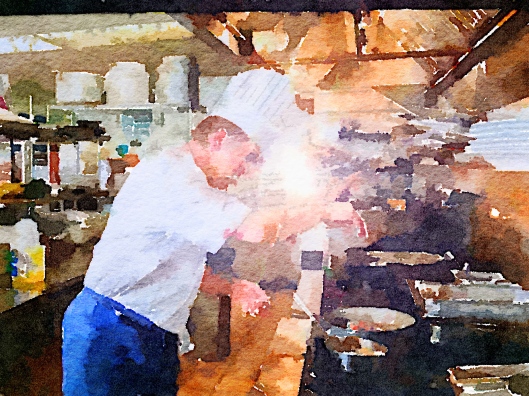 Walking through the back door of the kitchen the cook transitions from a street civilian to a professional cook the moment he or she changes into those crisp, clean chef whites and hounds tooth pants. The smell of maple bacon from the breakfast line and freshly brewed coffee is intoxicating and the cook takes it all in – the smells, the sounds of banging pots and pans, the cadence of orders marking the activity of communication through the pass, and the staccato rhythm of knives working through the prep of the day. He opens the roll bag carried under his arm and removes the prized tools that have become an extension of his hand: French knife, paring knife, flexible boning knife, peeler, and a steel. Reaching under the counter he lifts the tri-stone and begins the religious process of putting a fresh edge on his knifes and touching them with the steel to remove any burrs. When satisfied with the razor sharpness of these tools he hand washes them and lays them out on a clean side towel next to a secured cutting board. The cook is ready for the day, already demonstrating the obsessive behavior that marks the character of a professional in the kitchen.

“OBSESSION: An idea, thought, or process that continually preoccupies or intrudes on a person’s mind.”

On the inside, the obsessive behaviors of a professional cook are simply viewed as the way things are done. This behavior falls under the heading of “mise en place” – making sure that everything that is done has a place and is consistently in its place. The way that a cook’s apron is tied, the manner with which a knife is held, the sequence of steps in cooking, the dedication to cleanliness, the adherence to timing, and even the focus on building flavors in the proper order may seem to simply be the nature of the job to those who wear the uniform, but to those on the outside it may be viewed as obsessive, compulsive behavior.

Cooks, especially line cooks, are fixated on a litany of details that others might consider superfluous, but to that cook, they are as essential as breathing. How side towels are folded, where each ingredient is located in a roll top or lowboy, the direction of the handles on pans, how finely the parsley is chopped, and the consistent size of diced vegetables are, to the line cook – absolutes. There can be no variance from the standards that he or she works with, if anything is out of place, the system will fall apart. This is obsessive, but essential behavior for a professional cook.

Cooks are fixated on lists – from the formal BEO (Banquet Event Order) that details menu, timing, number of guests, and general intent of an event, to each cook’s daily list of tasks, most will admit that they cannot ever function without a plan and a checklist. Typically, a cook will make a list for the next day at the end of his or her shift and then revise it again in the morning before starting work. Next to that side towel with a cook’s razor sharp knives will be that telltale list. Without it, the cook is lost.

As the day progresses, the obsessive behavior of the cook intensifies. Aside from preparation of his or her station, the cook is mentally preparing to execute a’la minute cooking and plate each dish as the chef or team has determined important for various reasons.

Caramelization of proteins and vegetables to bring out umami and sweetness in a dish, deglazing a pan at the right moment, turning a steak 45 degrees to build those beautiful grill marks, or individually dropping fritters in deep fat so that they keep their shape and do not clump, and letting those steaks rest a minute or two before slicing on a bias in preparation for plating.   These details are imbedded in a cook’s subconscious. It’s all in the details; the details can never be set aside.

When the dish is ready for plating, each cook is fixated on how to assemble each component for maximum eye appeal. In some cases each item will have a separate, distinctive location on the china canvas while others may be intertwined to create intriguing height on the plate and that “wow factor” for the guest. The plate is assembled with many hands and presented in the “pass” for the chef or expeditor to inspect for accuracy, placement of fresh herbs or other garnishes, and the last minute wipe to make sure that the rim of the plate is free of drips and marks and shines as the frame of the cook’s creation. This process continues plate after plate throughout the shift. Each dish has it’s own trademark presentation that must be fully understood and protected by the line cook. In the end, every dish that leaves the kitchen carries the signature of those who prepared it.

As service winds down, every member of the restaurant team continues with his or her closing obsessions. Cooks clean a station a certain way, product that can be saved for tomorrow is chilled according to health standards, labeled and dated and placed strategically in a designated part of a cooler. The first draft of tomorrow’s prep list is built and notes are made on the prep cook’s clipboard for early mise en place, and communication is left for the chef regarding any items that need to be included on a vendor order. In the front of the house, the same type of activity is in full swing. Tables are checked to ensure that they are level, new cloths are draped over deuces and four-tops, flatware and glassware is strategically placed on the table top, in some cases measured from the edge of the table, and glassware lined up with a straight edge of some type. If any water spots remain on glassware, the server’s side work will include steaming and polishing glasses. Additional napkins are folded for another shift, salt shakers and pepper mills are refilled, and side stations are restocked with wine glasses, coffee cups and saucers, etc. The process cycles again and again.

Obsession becomes a way of life for cooks in particular. Just as the cook cannot turn off the flow of adrenaline that comes from working a busy line, so too is the case with the obsessive nature of a mise en place mentality. Many cooks find that the thought of an unorganized life that simply changes when he or she walks through the kitchen door is impossible to manage. Many might be surprised to see how methodical cooks are about mise en place outside of work. Cooks tend to load the home dishwasher a certain way, label and date items in their personal refrigerator, fold side towels a particular way, fold and organize their clothes a specific way, and yes – even write those lists as a guide for their day even when they are not at work.

If a cook plays a musical instrument – he or she becomes obsessed about it. If a cook is into gardening – it becomes an obsession. If the cook is fixated on health and exercise – it becomes an essential part of his or her routine and cannot be ignored – ever!

It is this obsessive behavior that lays the groundwork for a cook’s successful work and creative endeavors in the kitchen. Being obsessive is a key ingredient of success.

“Obsession is the biggest driver of innovation. It gnaws at you. It pushes you beyond what other people have tried.”

1 thought on “THE COOK’S OBSESSION”