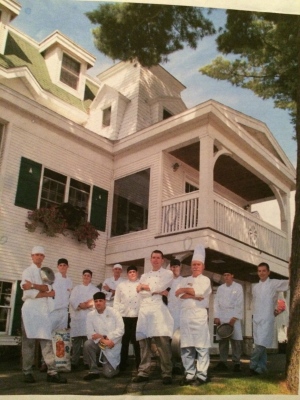 John was 16 and a junior in high school. He came from a family of modest means; dad was a carpenter, a pretty good one too; mom had her hands full taking care of John’s three sisters, his younger brother and him and decorating wedding cakes as a side business from their home. The family always had enough to eat, sufficient clothes, a warm house in winter and the necessary supplies for school, but it was apparent that college was probably not in the cards for John and his siblings.

One summer John was hired as a dishwasher in a local Italian restaurant; he immediately fell in love with the environment. He enjoyed the banter among the cooks, was invigorated by the pace of business, felt complete after a hard day in the dish pit, appreciated the opportunity to flirt with the waitresses, and most importantly, loved the aroma and flavor of the kitchen. The restaurant gave him purpose and hope.

When school started again in the fall, John kept a part-time job at the restaurant, working weekends and an occasional mid-week evening. His family was fine with this since he was able to have some of his own money, open a savings account and contribute a bit to the family fund.

As the summer of his 17th year drew near, the restaurant chef called John into his office. “John, I like your work ethic and can sense your interest in what is happening in the kitchen. What are your plans after your senior year in high school?” Jake sheepishly said that his family couldn’t afford college, so he really hadn’t given it too much thought. “I have an idea that you might be interested in. I learned how to cook through the old school of hard knocks and an opportunity given to me when I was your age. The restaurant I washed dishes at was part of a national apprenticeship program for cooks. It lasted three years, but at the end, I was an accomplished cook who could work in any kitchen.” John was intrigued. “I am starting a similar program at this restaurant and feel that it might be a perfect opportunity for you. I see myself in your work and your level of passion. If you are willing, I can start teaching you a few things as a breakfast assistant cook this summer and sign you up for the apprenticeship once you graduate.” John listened with great interest. “Talk it over with your parents and let me know.”

John’s parents were thrilled and said they would support his decision to the fullest. The next day, John was incredibly excited as he said, “yes chef” and signed on for a three-year adventure and hands on education. Ten years later, John accepted his first assignment as restaurant chef thanks to his early mentor and the chance at a future through apprenticeship.

This was a common story post WWII in America; a time of hope for everyone, visions of future prosperity, and nervous challenges for young people just starting out. College was still something for a few, out of reach for many, and not on everyone’s radar yet as an accepted right of passage. A career in the trades was something to be respected, and the mainstay of the American workforce.

Fast-forward sixty years and much has changed, but much remains the same. Young people still struggle to find where they fit, what their calling might be, and how to meet the expectations of college. What has changed is the feeling that college is for everyone, that without a college education there are very few opportunities in life. Fewer and fewer people are being trained for the trades (carpentry, plumbing, electrical work, engine repair, and yes, cooking). Those who are able to make the leap to college in culinary arts are fortunate, but oftentimes saddled with significant debt.

The media portrays the woes of a still weak economy and unemployment rates (although they have dropped considerably in the last 18 months), but from my experience, most restaurants are still constantly struggling to find qualified cooks who are enthusiastic and willing to stay on with an operation for a few years. When you consider the sheer number of culinary school graduates each year, this seems hard to imagine. It may very well be that graduates are either still not fully prepared or they are not willing to start from the bottom after such an investment in an education.

In many European countries the age-old apprenticeship model is still alive and well. In fact, many restaurants of a certain size are required to have apprentices under their wing. In the United States, the American Culinary Federation (ACF) boasts the only formal cooks apprenticeship program. Their model is aligned with the U.S. Department of Labor and requires a three-year commitment from candidates, a definitive program for apprentices including job rotation, skill validation, class work, maintenance of a log, periodic reviews, and a step scale for pay rates. This is a great program with, from my experience, solid results for both the property and the young apprentice. Yet, there are only 36 programs in the United States compared to over 1,000 schools offering some type of degree in the field.

Having spent time as a chef, manager and culinary educator I can confidently attest to one fact: most people who work in kitchens are tactile learners. They assimilate information and build skills by applying them and oftentimes find traditional educational models less than ideal. Apprenticeship blends tactile (hands-on) and traditional learning as does a college program, but with a different emphasis. Application of knowledge is the mantra that works in this case.

The advantage of apprenticeship to the restaurant is a stream of committed, contracted, enthusiastic young people who can be molded into solid cooks. This provides a level of solution to the problem of a qualified work force. The property will, of course, need to commit themselves to the design and implementation of a well-managed program.

The advantage to the student is a tangible way to learn the trade, time on the job with exposure to a variety of stations in the kitchen, and an education with validation that pays them while they learn. This is, in some cases, a longer road to a potential position of sous chef or chef, but one that is far more accessible to a large portion of the population. The opportunity to attend college is wonderful and valuable, but not the only means to an end.

I would encourage those restaurants that find it difficult to find sufficient young cooks with potential to become part of the solution. Look into the process of affiliating with a formal apprenticeship program, or build your own, less formal model as a start. Invest in building cooks and realize that part of our responsibility in business is to teach and train. It has worked for many decades; maybe the time is right to bring it back into focus.

*If you need assistance in establishing an apprenticeship model at your restaurant, contact Harvest America Ventures. www.harvestamericaventures.com

← HAVE IT YOUR WAY – HAS THIS GONE TOO FAR?
THE CULINARY COUNTER-CULTURE IS ALIVE AND WELL →