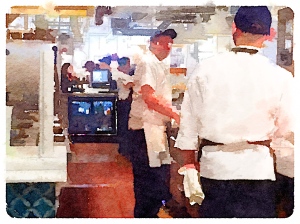 The older you get, the more time you invest in thinking back. Recently, I have been thinking about those first moments working in a kitchen when I was 15. Yes, I was washing dishes, and yes it was originally just to enjoy having those first paychecks during the summer away from school, but it quickly became something else.

I am not entirely sure if it was a true epiphany, or if the light bulb grew brighter as time went on, but at some point I knew that the restaurant business was for me. In fact, I have never done anything that did not involve the kitchen. I guess it has been my calling, so to speak.

If I want to romanticize the whole thing I could say that my decision happened one day during that summer when I was 15, working papers in hand, washing dishes and diving for pearls on the weekend, when Millie the short order cook said to me, “Do you want to learn how to cook eggs?” Of course, I wanted to learn how to cook eggs; it was certainly better than sweating over the dish machine. So, that was my first time cooking in a restaurant, learning how to cook eggs under Millie’s guidance.

I had cooked at home before since both of my parents worked. I was a latch key kid for quite some time. My job was limited to typically turning something on that had already been prepared, firing up the oven and sliding in a casserole in between watching our black and white TV, or playing strikeout with friends in the back yard. This was different, way different. I was standing next to Millie on the line with an apron and a hat, helping with prep and jumping in when she had a rush of tickets.

That summer I learned to cook omelets, scrambled, sunny side, pancakes, French toast, and the ultimate test: flipping eggs over easy. I suddenly had some skills. Looking back, I think that it was a great summer. By August, I even had the start of some short order cook’s swagger. Hell, I even built up enough courage to talk with the young waitresses, home from college, working for tips. Yes, it was a great summer.

Throughout the year, I would occasionally find myself filling in for Millie on a day off or helping out after school when they knew it would be extra busy. I had a job, I was needed, and I even made some money. I still couldn’t hold a candle to Millie; after all, she had been doing this for many years. In fact, Millie’s husband had been a real chef in a high end dinner house. She always spoke of him with pride, until she became quiet knowing that when he passed away from a heart attack, it had been while he was working in that same restaurant.

I continued working summers and part-time during the school year until it was time to shuffle off to college. I didn’t know what I wanted to be, so eventually I settled in on a school that taught hotel management. This, I felt, was the natural progression from working in the kitchen, and a manager was a person that people would respect.

When I left for school at the end of that last summer, Millie gave me her husband’s personal cookbook collection. It was one of those gifts that you never forget. Fast forward through those college years to the point where I was looking for that first post school job, the one that would set the tone for a career. I applied for a job as assistant restaurant manager. The interview was enlightening. The manager tore me apart (rightfully so), realizing that I knew very little. His suggestion was that next “light bulb moment”, he suggested that I return to the back of the house, build my skills, try different styles of cooking, discover the inner workings of a professional kitchen, and then look for that job as a manager. He was right; the only part that didn’t work for me was leaving the kitchen. The back-of-the-house became my home.

After more than four decades of connections with the kitchen, cooks, numerous styles of preparation, great chef mentors and some lousy ones as well, I wind up here, musing about the good times. There have been many great, memorable times and I hope that there will be many more. The kitchen is the perfect place to be, the perfect classroom for cooking and for learning about life, the perfect job to aspire to. Here are just some of the reasons why it is so great to stand on a soapbox and say, “I am a product of the kitchen”:

I am always amazed at how much I learn every day, and how much more there is to learn. I do know that the kitchen is truly a wonderful classroom, a place where you can work hard to  become a good tradesperson, and a good citizen.