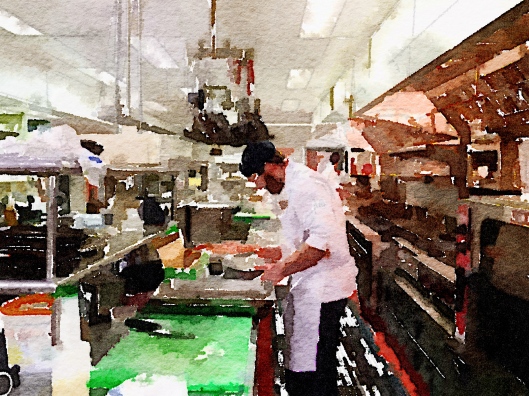 It’s now day nine of eleven straight ten hour days in the kitchen, and Jake find’s it increasingly hard to get up and get his act together before heading off to work. He makes a mental note to turn off his phone when that single day off comes around. The overtime is nice, but the hours are taking their toll.   What seems ironic is that once he walks through those kitchen doors, puts an edge on his knives, and pulls down the never ending prep list, he is always able to kick it in gear. It might be the multiple cups of espresso, but Jake knows that it is something else. When that adrenaline turns on, he feels a burst of energy that not only gets him through another shift, but also, makes this work schedule seem acceptable and even enjoyable.

All across the city this same story is playing out in restaurants of all types. There always seems to be more business and fewer employees willing to take on the role of cook and give it their all. Even many of those culinary school graduates don’t seem to have the stamina, or the desire to commit at the same level that Jake views as “the way it is.”

Jake, like many other line cooks, views his commitment to the restaurant and the chef as a binding agreement. An agreement that says “Yes chef – whatever it takes.” When another, less than committed, cook calls out sick, or simply doesn’t show up, the chef always calls Jake. He knows that “no” is not part of Jake’s vocabulary. If the chef needs him, Jake says yes. The chef may always ask, but he knows what the answer will be.

Even after nine straight days, Jake arrives early for his shift, and leaves well after his scheduled time. Oftentimes, Jake gives his all-out extra – off the clock. The chef knows that this is wrong, and against the law, but Jake doesn’t seem to mind, so it is ignored yet appreciated.

When the call comes in, it never takes Jake very long to pull himself together, run an iron over another set of kitchen whites (pretty much all the clothes that he owns), grab his knife roll bag, chug a cup of coffee from his Keurig and rock out the door. Jake lives alone, and although he has some friends, he never seems to find much time for them. His schedule never seems to align with anyone else’s.

Fifteen minutes into his shift and that adrenaline is pumping like crazy. He is already behind so the pace has to pick up. Night after night of relentless orders from the POS always seem to leave his mise en place nearly empty. Every day he needs to start from scratch. Another espresso and he can count on stepping up the speed of prep. Thanks to his body’s ability to address his immediate need with that hormone that works pretty well at increasing his blood flow and giving him that burst of energy to feel superhuman, he knows that he will get everything done.

“It is the greatest shot of adrenaline to be doing what you have wanted to do so badly. You almost feel like you could fly without the plane.”

There are times in those days of endless work, under the pressure of the clock, without enough help to reasonably approach the amount of tasks in front of you, that this adrenaline gives you a somewhat “out of body” experience. Some of the things that you accomplish are done without even thinking. That hormone is the engine; the cook is simply the tool.

Jake has forgotten all about how tired he has been at the end of his last three shifts and how he has neglected the most basic tasks at home like paying bills, buying food, washing clothes, or checking in on friends and family. Now that he is at work, his haven for forgetting everything else, and that natural speed is flowing through his veins (with the help of several espressos), everything else is unimportant. Making sure that he is ready for service, his mise en place is tight, and his mental state is fine-tuned towards cooking for another 200 guests tonight – this is all that matters. Sleep will come much later, long after the last order is grabbed in the pass, a few late night drinks are enjoyed with fellow workers, and he drags himself up the stairs to his apartment.

That long anticipated day off finally arrives, but Jake spends much of it in bed. The bills, food shopping, clothes washing and calls to friends and family will have to wait again. As he lies in bed, unable to move a muscle, his only thought is whether or not he remembered to shut off that cell phone. All he needs to do is catch up on some sleep and then he will be fine.

“A huge adrenaline rush is usually followed by a pretty low point.”

It’s now 11:30 in the morning and Jake manages to drag himself out of bed and make a cup of coffee. He looks in the bathroom mirror in horror at himself – he looks ten years older than he is and two days worth of beard growth doesn’t help. At least he has the rest of the day to relax and get in shape. Then the phone rings. He wonders if he should just ignore it – he knows who would be calling. It rings a couple more times and then he picks up that damn iPhone on his bed stand answering with “hello.” Of course, it’s the chef. “Jake – sorry to call on your day off, but I had another cook call out for tonight and was wondering if you are able to come in and cover. I know this is an inconvenience, but it would really mean a lot to me if you said, OK.” “Yes, chef – I’ll be in as soon as I can.”

Jake looks in the mirror, let’s off a stream of expletives, and jumps in the shower. He knows that no matter how tired he is, no matter how badly his muscles ache or how foggy his head might be at the moment – that good old friend adrenaline will kick in to save the day, one more time.

As cooks and chefs, we have, for many generations simply accepted our fate as workers without a real schedule. We boast, as if it were a badge of honor, about how many hours we work, shifts in a row we endure, and how much more stamina we have than people with “normal jobs.” This is our lot in life. What is changing is a newer generation that is not so inclined to carry the same torch. Who is right and who is wrong? I don’t have an unbiased answer to this since I come from that older generation that was inclined to say: “Yes chef”, no matter what the request. My inclination is usually to support the old approach since that is what I know; it is how I was trained. But, the fact remains that the chain is being broken and we may need to rethink some of these established and accepted methods of operation.

Our friend adrenaline only gives for so long and then it begins to take more than it provides. The human body is not designed for constant abuse. Adrenaline is a response to stress and will increase heart rate and blood flow. This gives a cook a sense that they have renewed strength. In most cases, once the stress has passed, everything returns to normal, but when those stressors are constantly present and the body relies too heavily on adrenaline to fight the battle, then the result can be quite harmful. According to the Mayo Clinic, too much stress and too much dependence on “coping” adrenaline levels can result in depression, digestive problems, headaches, heart disease, sleep problems and weight gain.

There is a happy medium – somewhere. The answer can only be gained if the restaurant industry commits the energy to studying the challenges of work, employers learn to create balance for their employees, and cooks discover what their limits are and learn to feel comfortable saying no, on occasion. It takes an industry to solve this dilemma and in return create an environment that is welcoming to new generations of workers.