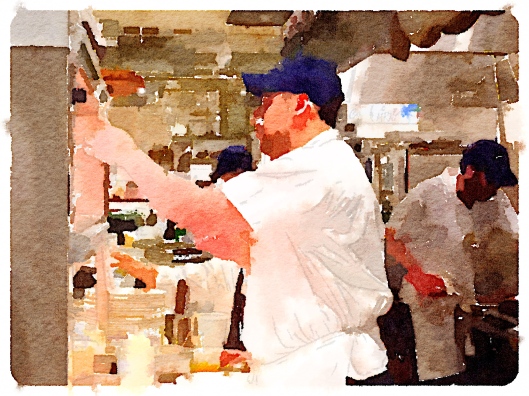 There are certain things that when viewed together just don’t seem to marry well: oil and water, bald tires and icy roads, puddles and live electric wires, and the typical line cooks arsenal of attitude, sharp tools and intense flames. Somehow, in kitchens, we make the latter work, but not without challenge.

Professional kitchens are fairly dangerous environments with more opportunities for crisis situations than most people could imagine. As cooks we are trained to respect and appreciate the danger and learn to view these challenges as necessary to the performance of our jobs.

Although seasoned cooks may not stop to think about it, every day that they walk through those kitchen doors there lies the possibility of danger through action or re-action. Those who have been around long enough have probably witnessed or experienced the results of a lack of focus on this possibility. I don’t know the national statistics, but I would say that emergency rooms probably know many cooks by first name. Accidents don’t just happen, they are usually the result of people not paying attention, not being aware of the danger, not caring about their own or others safety, or simply being careless and thoughtless.

For all of the cooks out there and wannabe cooks thinking about this career choice – here are some tongue and cheek observations and rules to live by:

THERE’S DANGER AROUND EVERY CORNER

Knives are a cook’s best friend and a novice’s worst enemy. Knives are everywhere in a kitchen waiting for the opportunity to inflict pain on those who fail to respect their potential or properly care for these tools. Dull knives are dangerous and inexcusable in a professional kitchen. The wrong knife for the job is also a red flag for anyone working in hounds tooth pants. The first rule that any line cook must take to heart is to learn how to care for and respect these essential tools.

There are many other valuable, yet highly dangerous sharp tools in the kitchen – each carries a set of rules that dictate how the cook must address them. Open electric slicer blades, cleaning that same slicer without unplugging it from power, the Buffalo chopper without the blade guard secure, a meat grinder worm that is fed meat without using a safety tube plunger, the all-mighty mandolin that has seen many cooks sacrifice finger tips for the sake of perfect julienne or waffle cut potatoes, the box grater that stands in waiting for exposed knuckles, and even the simple serrated cutter on a box of film or foil can easily take a cook out of active commission while they wait for stiches or cauterization of the finger tip or thumb.

The point is always to NOT get the point.

Where there is smoke, there is fire and in a professional kitchen there is plenty of both. Cooks crave the flame. The sound, smell, look, and intensity of the heat that comes with the turf as steaks and chops caramelize and release their intoxicating umami, scallops sear in a pan over a deep blue flame, a hollandaise browning evenly under a salamander broiler, and peppers of all sizes char while they rest on the grates of an open burner – this is what every cook loves. The heat is intense, even more so over those dancing flames. The ambient temperature on the line may hover around 120 degrees, but standing over the char broiler with 6 inch flames, or catching a hot pan on fire when deglazed with wine or brandy, can drive that temperature well past the point where a cook begins to feel like the steak on the grate. The sweat pours down a cooks back, easily soaking whatever chefs jacket or shirt he or she chooses to wear, and the hair on a cook’s arms quickly retreat from heat driven combustion. At this point, the heat becomes the motivation, the smoke keeps a cook focused, and the flames dare the line cook to get even closer to peril.

Attitude inevitably kicks in when the energy on the line is matched by the danger. While some may take offense at the abrupt demeanor of line cooks during service – few can understand how close to physical and mental meltdown they might be. Sometimes others simply need to accept a nod, or single word response from a cook in this state, or even understand that they are not intentionally ignoring you – it is just the moment of intensity that demands full attention. Failure to stay in the zone can result in problems with the food or “accidents” because attention was diverted.

There will be burns from the flames, shriveled arm hair, even a callus or two from grabbing pan handles that are way too hot for even the most seasoned cook. There are bumps into broiler handles that will result in a blister, and splatters from that sauté pan or deep fryer that will leave a mark that takes months to subside, but nothing compares to that deep, below the surface burn from hot water or steam. Grabbing that pan from a 500-degree oven with a damp side towel will spell trouble that burn ointment can’t touch. Opening that convective steamer door before all of the steam has dissipated will yield a facial burn to rival the worst summer sunburn, and spilling a 180 degree sauce or a 220 degree pot of boiling water on your forearm, or thigh will result in excruciating pain that is only compounded throughout the night under the intense heat of line work.

It would not be too far fetched a thought to have a “proceed at your own risk” sign at the entrance to the kitchen, just like the “no lifeguard on duty” sign at many hotel pools. This doesn’t excuse the business from liability for a cook’s injuries, but rather warns the individual that if they don’t stay focused, all of the time, then the odds of injury are pretty high. Lifting without bending your knees, failing to dry mop spills on the floor, placing heavy items just out of reasonable reach, keeping flammable liquids like clarified butter or alcohol too close to an open flame, working with dull knives, or failing to protect your hands from the anxious blades of a sharp knife or mandoline, will all lure a cook into the realm of danger. It is the cook who allows an accident to happen, accidents don’t occur on their own, nor are pieces of equipment capable of malicious thought to do harm.

Ah, Murphy’s Law once again – funny how it always seems to hold true. Being on your game is an absolute in the kitchen. There are literally hundreds of things that can go wrong on any given day, and many of them could result in injury to you or someone else. To this end, there are rituals that have become common law in most kitchens – all designed to pay respect to Murphy’s Law. When a cook is walking up behind another it is always expected that he or she will shout out “behind”. When he or she is carrying a hot pan, pot full of stock, or sauce, a sizzle platter, or even a stack of plates direct from the 180-degree rinse, the cook will call out “hot stuff”. When leaving a walk-in cooler, the cook will knock on the door to warn anyone nearby that the door is about to open, and the list goes on. Everyone in the kitchen is always on guard, always cognizant of what could go wrong, always aware that a false step could spell disaster.

All of this tension can stimulate that aggressive monster that resides inside many line cooks and chefs. To some, it doesn’t take much to wake up the beast and pass on his wrath to everyone and anyone in close proximity. There are some who seem to take joy and pride in displaying this beast on a regular basis (a way to mark the cooks territory just like a wild animal), while others struggle to keep the monster inside and under lock and key. It is this battle to be in control of the beast rather than the beast being in control of the cook, that many face constantly.

Even those in control of the beast can use its energy and instinct to fight when faced with insurmountable odds during a super busy service. It is at this time that the job demands everything that a cook has to give, a time when everything gets put on the table and a super-human effort is necessary. This is when the cook and the chef say with great confidence: “bring it on!”

The final master tool at the cook’s disposal can be used for positive results or it can tear a team apart; this is power of words. Words are comforting or they can be incredibly destructive. Choosing the right words to relay understanding, frustration, acceptance, disappointment, happiness, anger, approval, or dismay, are essential parts of a cooks brand. Those who take the time to choose them wisely will grow to become leaders while those who allow emotion to form words that do nothing to encourage and everything to destroy will rarely reach the pinnacle of their career.

Every cook has this arsenal of tools and every cook has the ability to decide how those tools will be used.   As Yoda said in Star Wars: “Choose wisely.”

1 thought on “KNIVES, FIRE AND ATTITUDE – THE LINE COOK’S ARSENAL”