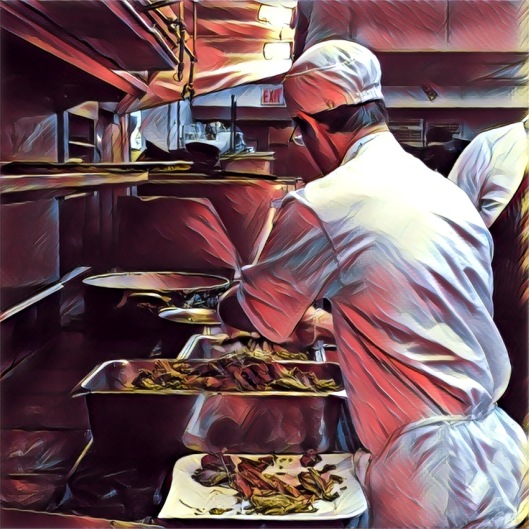 What does it feel like to be part of that downward spiral situation on the line referred to as being in the weeds? This is different, a far cry, from just being buried in orders on a busy night. This is more than a situation – it is a condition, a condition that feels like drowning – going down for the third time without anyone nearby to pull you back. This is a situation that makes a cook feel helpless.

The Urban Dictionary definition of “In the weeds” is:

Although these definitions are true they fail to look at the underlying cause and the physical, mental, and emotional state of the person who is facing this situation. Anyone who has worked in a restaurant kitchen has experienced the condition of being “In the weeds” and knows how debilitating the situation can be. Cooks do everything in their power to avoid the situation and spend many anxious hours worrying about the next time that they will face this unhealthy condition head on.

Let’s take a look at some of the probable causes and try for a moment to feel the state of helplessness that line cooks and chefs dread.

It is a Friday afternoon at the bistro when Jake arrives late for his shift. The chef is not happy and makes his displeasure known to Jake who should have arrived at least an hour earlier for this anticipated busy night. Jake was not in his best physical shape today – it might be the start of a cold or it could be a result of those few extra drinks with friends the night before. Whatever the cause – Jake had a pounding headache, suffered from a lack of sleep, and ached all over. “It will be fine once I get started” thought Jake to himself. He had been here before and had worked his way through preparation for a busy night thousands of times before. A few cups of coffee, a little sweat from the heat of the ranges, and he would be back to normal (at least maybe 80%).

Everything seemed a bit more difficult today. His knives didn’t seem to respond to his hand directions like usual, he had a tough time focusing on more than one task at a time, the repetitive tasks that he was certainly familiar with felt a bit cloudy, and damn – his head hurt. Knowing that he was already a good hour behind, Jake tried to shake it off. He was sweating much more than normal even though the heat of the kitchen was the same as it always was and he was faced with some mild hand tremors that made it challenging to keep his knives on point. It didn’t feel like the expected results of a slight hangover – this was different. He plugged along trying hard to stay on task and check off items on his mise en place list.

By 4 p.m. the other line cooks were winding down with their final prep list details while Jake was feeling the pressure of a list that seemed to never end. He wasn’t sure how he would be able to finish by 5:30 when the doors opened to the restaurant and a steady stream of orders began to click off the printer. Being a proud, seasoned cook, Jake refrained from asking for help – this would be an admission of weakness. He picked up the pace as best he could.

An ill-placed knife found his fingers and a gash began to spread blood on his cutting board. “Crap!” He stepped aside and found the first aid kit, washed his wound, and tightly wrapped a few bandaids over the cut (probably not deep enough for a stitch, but still bleeding like a bastard) and then pulled on an extra latex glove. Jake washed and sanitized his cutting board and went back to work while his finger throbbed from the gash.

It was nearly 5:15 when he started to set-up his station knowing that his mise en place was still a bit light: “I can keep doing some prep during service as long as my station isn’t hit too hard”, thought Jake. Unfortunately, right at 5:30 the orders started to arrive and Jake’s station seemed to be the favorite. For the next 30 minutes he kept up quite well, but then as his mind was swirling with the multiple preparations before him while his head continued to pound, Jake grabbed a sauté pan from the oven without a towel. It only took a brief second to realize that he just seared a mark across his palm and inside of four fingers. He dropped the pan, shouted in pain and ran to run the hand under cold water. The orders kept arriving.

That profuse sweating during prep turned into cold sweats even as the temperature on the line exceeded 120 degrees. The color in Jake’s face was turning snow white and his headache converged with a bit of dizziness and an inability to stay focused. He continued to push on. At this point the others on the line began to notice that Jake was not right. This well-seasoned line cook was starting to look like a deer in the headlights. Jake stopped mid-stream, tongs in one hand and a sauté pan in the other and simply stared at the dupe rail. When his teammates asked him if he was ok – Jake failed to respond. Items already in pans were starting to burn and a full oven left unattended had some looming food casualties in its grip. Jake leaned on the chef’s table and lowered his head – he was in the weeds.

Responding as any team would (every other cook had been where Jake was a few times themselves) they pulled Jake off to the chef’s office, sat him down with a tall glass of water and returned to his station to try and make sense out of the growing mess before them. The sous chef who had been expediting on the other side of the line jumped in and took over one of the stations while orders were double-checked, and in some cases re-fired. It took them a good half hour to pull it together, but the relentless stream of Friday night orders would make this service seem like it would never end.

Jake was done for the evening. After a few minutes in the chef’s office he stepped outside for some fresh air and then returned to the back kitchen to do some cleaning while he tried to straighten out physically, mentally, and emotionally. He washed dishes and pots, swept and mopped, drank lots of water, ran errands for the line cooks, and made it through the night. At the end he apologized to the team as he was filled with shame and remorse. The sous chef did not acknowledge Jake’s apology and simply said that they would talk tomorrow. Jake felt that he had let everyone down, that he was a failure.

Now, if this scenario sounds familiar – join the crowd. Again, I don’t think that I know a single cook or chef, myself included, who has not experienced the same in his or her own career. It happens, but it can be avoided. Here are some common ways to keep you out of the weeds:

Those extra drinks always come with a price. The temptations are all around – cooks like to play as much as they like to work hard. Keep moderation in mind especially when you have to work tomorrow.

Take care of yourself. Stay physically fit, get enough sleep, find your way to relax, and find a friend who can be your ear when you need to vent. Don’t keep things inside – if something is troubling you it will be important to share it with someone who will listen and give you a dose of honest advice.

You know early on when things are not going well, when you are behind, when your mise en place is not tight. Restaurant work is built on team – so never be afraid to say: “Hey, I’m running behind, can someone give me a hand?” If you fall down because of poor mise, then the entire team will suffer. It is in their best interest to lend a hand.

If, for whatever reason you are not going to be a positive contributor to the line, then know when it is time to let the chef or sous chef know. This is not to give you an excuse for bailing on your team, but rather give others a heads up so that adjustments can be made. In the end it is the group effort that wins and the team cannot allow one person to drag them down.

Even when a cook is having a difficult physical or challenging mental health day – if his or her mise is tight then it is very likely that he or she can pull it off. If your prep is shallow then the results will almost always be devastating.

When you start to have that deer in the headlights feeling – stop for a second, take a breath, collect your thoughts, and ask the expeditor to change the pace for a moment or two until you can catch up. This is how a team works and this is how an expeditor manages the stress of the line.

Again, every cook goes through this and probably will a few times in his or her career. At the end of the shift make sure you assess what went wrong, discuss it with the chef and your teammates, make a point of committing to correcting your mistakes, and then let it go – move on. Write this one off as a painful learning experience and make sure that you are prepared to avoid these mistakes in the future.

4 thoughts on “A COOK IN THE WEEDS”